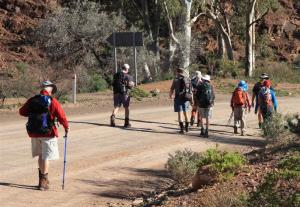 Setting off on day one

The Heysen Trail extends north from Cape Jervis on the Fleurieu Peninsula in South Australia for 1,200km to Parachilna Gorge in the Northern Flinders. Having completed this walk in 2006, the 8th group of ARPA Bushwalkers to walk the Heysen Trail planned an initial but unofficial extension of 120km through to Owieandana Station from Parachilna Gorge.

The route was to be via Oratunga, Moolooloo, Patawarta Gap, Angepena Goldfields, Frome Gap and Angepena. On 1 September 2009, the group, consisting of eight walkers and four support drivers with 4WD vehicles, commenced walking from Parachilna.

Six walking days were involved with a rest day at Angepena Goldfields. The 4WD vehicles carried the group’s food, tents, sleeping bag, etc. between campsites. Ideal walking conditions prevailed for most of the walk. The first day’s walk included a walk up the Oratunga Creek for about 13km. Other than this the walking was mainly on 4WD tracks through pastoral leases.

Following the pastoral lease roads through areas of native pines, river red gums and wild flowers, the group experienced many different and interesting land formations. There were a number of bores and minefields with associated water tanks on the way. 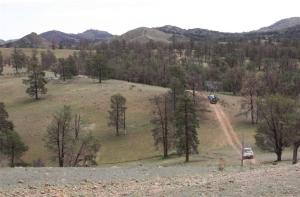 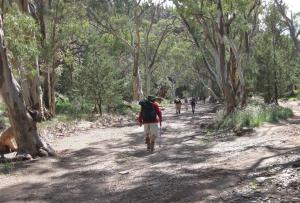 The campsite near Hut Bore