On 26thAugust, 21 of us assembled at the Balcanoona ranger station under the leadership of Judy and her committee. The camp kicked off with our communal BBQ and salads: a mix of own and shared food.

The Balcanoona Shearer’s Quarters proved very suitable for the camp, hosting most of us in the building and a few in co-located tents.  In addition Judy had organized excellent weather for us during the day, circa 15-23 deg C albeit the 1 and 2 deg C nights were a bit confronting, especially for those emerging for the early morning trek!

The Walk programme had challenges for B and C walkers, erring on plus, and a Day 3 lay-day provided a pleasant rest.  The areas we walked were as follows, suitably tuned for the grades. 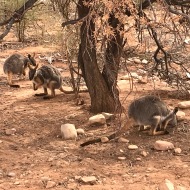 Sadly, the walk low light was the state of the countryside, which had suffered badly from the extended drought.  There was a complete absence of green vegetation and many of the trees, brown and curled, will not survive.  Wildlife was very scarce and in very poor condition, except around the stations. Those rock wallabies we did see were slow and not inclined to move far at our approach.  The walks were eerily quiet from the absence of birdsong and even those few waterholes which still had a slurp of water were surrounded by large numbers of dead kangaroos, too ill-fed and weak to survive.

The Camp Dinner was held a day earlier than planned as some members had to leave the next day.  There was a feast of tasty baked veggies and sweets provided by all attendees, to whom owe our thanks. 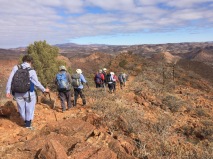 Our thanks were especially extended to Judy and her committee of Pat and Lorraine.  For the rest of us, who led or tailored walks and contributed to Camp dinners and the many aspects that made the camp a success – Thank you all. 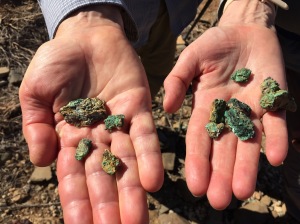